Meeting with your consultant?

Download our FREE handy guide containing useful questions you may wish to ask your consultant and some handy tips to help you through your consultation. Simply submit your details to receive in your inbox. 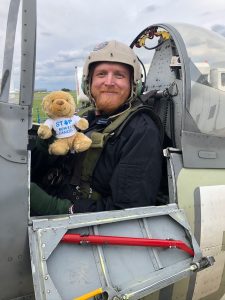 transformed the last few years of his life.

Stuart Henshaw, 44, of Northampton, passed away on Christmas Day, just over five years after being diagnosed with bowel cancer.

He was supported, in the comfort of his own home, by a specialist clinical team from Healthcare at Home throughout his illness.

His best friend Rachel Farrington-Allen, who first met Stuart at school when they were 10-years-old and describes herself as his “sister from another mister”, helped care for him, in his own home, throughout his illness and was with him when he died.

She wrote to Healthcare at Home after he passed away to express her thanks to the team.

She said: “Stuart trusted Sam with the most important of conversations. She provided the reassurance to him that he was in control of what he wanted to do with his care.

“She was available for him to chat to when he needed to offload, she shared his triumphs and sorrows, and most importantly she made him feel safe.

“As a carer, I would not have got through it without her.”

Talking about Natalie, she praised her for taking the time to really listen and get to know Stuart.

She said: “Stuart liked to chat about the things he was doing, for his bucket list and with his life. He was never scared of dying but was terrified of not living.  Nat never tired of hearing about his bucket list items and celebrated every success appropriately with him.

“She was also superb during the conversations we had with his consultant, helping us to ensure that important questions were answered.”

Rachel extended her thanks to the whole team that cared for Stuart, adding: “The level of care he received at home was head and shoulders above anything I’ve ever experienced from any healthcare provider. They didn’t just support Stuart, they supported me and his family too. “We’ll never be able to thank them enough for all that they did.”

Healthcare at Home is an independent provider of clinical services of healthcare out-of-hospital who are already working in partnership with many NHS organisations and individual cancer consultants. They are one of the UK’s largest providers of private cancer therapies delivered in the home.

With the advent of COVID-19, providing healthcare in the home in a both one-to-one and virtual setting is an ideal way to reduce the threat of infection in immunocompromised patients and reduce any associated fear factor with attending the hospital.

Please select if you're a...

Thinking about having your cancer treatment at home?

Find out why thousands of people are choosing us to deliver their chemotherapy treatment in the comfort of their home and the real benefits it brings to you and your loved ones.